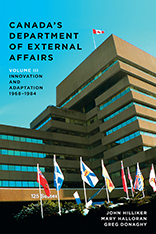 Volume three of the official history of Canada’s Department of External Affairs offers readers an unparalleled look at the evolving structures underpinning Canadian foreign policy from 1968 to 1984. Using untapped archival sources and extensive interviews with top-level officials and ministers, the volume presents a frank “insider’s view” of work in the Department, its key personalities, and its role in making Canada’s foreign policy. In doing so, the volume presents novel perspectives on Prime Minister Pierre Trudeau and the country’s responses to the era’s most important international challenges. These include the October Crisis of 1970, recognition of Communist China, UN peacekeeping, decolonization and the North-South dialogue, the Middle East and the Iran Hostage crisis, and the ever-dangerous Cold War.