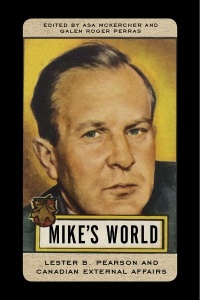 Although fifty years have passed since Lester Pearson stepped down as prime minister, he still influences debates about Canada’s role in the world. Known as “Mike” to his friends, he has been credited with charting a “Pearsonian” course in which Canada took on a global role as a helpful fixer seeking to mediate disputes and promote international cooperation, a development that led to him winning a Nobel Prize. It is therefore surprising that this much vaunted reputation is increasingly subject to criticism.

Mike’s World explores the myths surrounding Pearsonianism to explain why he remains such a touchstone for understanding Canadian foreign policy. In it, leading and emerging scholars dig deeply into Pearson’s diplomatic and political career, especially during the 1960s and his time as prime minister. Topics range from peacekeeping and Arctic sovereignty to environmental diplomacy and human rights policy. Chapters also explore Canada’s relations with South Asia, the Middle East, Europe, and the Americas. They show that competing forces of idealism and pragmatism were key drivers of Pearsonian foreign policy, and how global events often influenced politics and society within Canada itself.

Situating Pearson within his times and as a lens through which to analyze Canadians’ views of global affairs, this nuanced collection wrestles with the contradictions of Pearson and Pearsonianism and, ultimately, with the resulting myths surrounding Canada’s role in the world.

This book will be of interest to students and scholars of Canadian history, political science, and international relations. Accessibly written, it will appeal also to a more general audience.